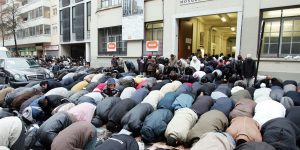 Many people opine the serious issues Europe is having with Islamic populations will present themselves in the United States in the next 15 years or so.

Across Europe, the Islamic Movement is overtaking towns and cities, while European leaders continue to support and encourage the influx of sharia-adherent muslims (aka jihadis).

In Britain, police turn a blind eye to thousands of rapes by muslim men against non-muslim women, while violent crimes have skyrocketed.  Britain’s leaders, including the royal family, appear to be ignorant of this threat, while muslim leaders make clear they have no intention of assimilating.

In 2009, when UTT’s President John Guandolo met with officials in the United Kingdom, he attended a symposium at the British Defence Academy where muslim leaders proclaimed to a group of military officers, police, and judges that muslims “are not in Britain to assimilate, but to coexist until sharia is the law of the land in Britain.”

Syed Muzaffar Shah Qadri is not allowed to “preach” in Pakistan, but is welcomed by the UK’s government.  Meanwhile, free speech advocates like Pamela Geller, Martin Selner, and Brittany Pettibone are banned by the British government from entering the country.

The contrast could not be more stark. 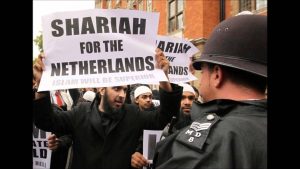 Across Europe, from France, Germany, Belgium, the Netherlands, Italy, Sweden, and elsewhere, the Islamic communities are growing and are demanding sharia be the law of the land.

Meanwhile, the European Union critiques Israel for revoking the permanent residency of jihadists.

Will these problems and issues come to the United States?  Will America have to deal with the invasion of jihadists and cowardly behavior of its leaders?

It is already here.

Non-muslim students are taught Islam is a religion of peace, the 5 pillars, and the great benefits Islam has brought to civilization – which are historically untrue. Islamic school texts teach muslims that “Islam is not a religion, however, but a complete way of life,” and “The law of the land is the sharia of Allah,” and “Anyone who dies in jihad automatically goes to paradise.”  Muslim students in the U.S. are also taught “The duty of muslim citizens is to be loyal to the Islamic State.” 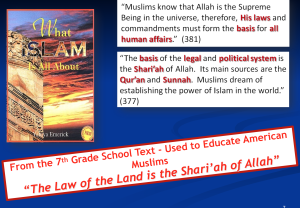 While U.S. non-muslim public school 7th graders are being taught by things which are objectively untrue about Islam, muslims are being taught requirements in Islam consistent with the teachings of Al Qaeda and ISIS – and sharia.

The Muslim Brotherhood continues to work inside the U.S. government at the local (school boards), state (State Legislatures), and federal levels.

This happens while the State Department supports the massive influx of jihadis into U.S. towns and cities, with many of these locales unaware jihadis are being dumped in their areas by “Christian” and Marxist organizations.

Today there are over 3200 Islamic centers/mosques across all 50 states in America.  Most of these are hostile – ie a part of the U.S. Muslim Brotherhood’s network.  Additionally, there are thousands of other hostile jihadi organizations all operating to wage “civilization jihad” to overthrow our government and impose sharia under the control of an Islamic State.

How can we say America is “15 years behind Europe” as it relates to the Islamic threat?