Why Isn’t Our Judicial System Protecting Our Children?

Siraj Wahhaj (Jr), a fugitive from justice (flight risk), killed his handicapped son and kidnapped numerous other children, yet was released from custody with a pre-trial bond of $20,000 and an ankle bracelet.

Wahhaj is a jihadi.  The vast majority of government officials still have no idea what that means nor do they understand the threat Islam poses to local communities across America.

Government leaders fail daily to target jihadis (“terrorists”) and, therefore, fail to protect the very citizens for whom they are responsible to protect.

This is all about Sharia.

In December 2015, an “Oral Fatwa” was issued by the Sharia board of the Islamic State authorizing its members to “kill newborn babies …and disabled children.”  The Fatwa was issued by Saudi sharia judge Abu Said Aljazrawi.

On  August 3, 2018, a search warrant was served on a compound in Costilla, New Mexico giving police the authority to search for an abducted 3 year old named Abdul-ghani (AG)  Wahhaj, the son of Siraj Wahhaj (Jr).

AG Wahhaj was handicapped, suffered from seizures, and could not walk.

AG Wahhaj’s remains were found on the compound.

When officers initially entered the compound, Siraj Wahhaj (Jr) refused to follow verbal direction, hid from officers, and was armed with an AR-15 rifle with 5 loaded 30-round magazines, and 4 loaded pistols, including one in his pocket.  Many more rounds of ammunition were found in the compound, which consists of a small travel trailer buried in the ground covered by plastic.

Four other adults, Lucas Morten,  Hujrah Wahhaj, Jany Leveille, and Subhannah Wahhaj were also arrested.  Eleven children ranging in age from 1-15 were found on the compound which had no water, plumbing, or electricity.

Last week one of the women passed a note to her family in Georgia pleading for food and water.  This was the tipping point that moved the Taos County Sheriff Department to serve the search warrant.

The responding officers advised, “The only food we saw were a few potatoes and a box of rice in the filthy trailer.”

Taos County Sheriff Hogrefe conducted a two month investigation with Clayton County, Georgia and FBI investigators attempting to locate AG Wahhaj.  According to Sheriff Hogrefe, the FBI had recently provided information on this location, but did not feel there was enough probable cause to search the property for the boy.

Does the FBI know about the Fatwa? 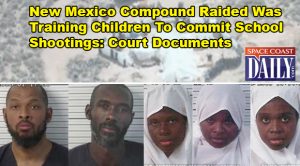 AUG 13, 2018:  A detention hearing at Taos district court with Judge Sarah Backus was held.  The following information was disclosed:

Siraj Wahhaj (Jr) is the son of Imam Siraj Wahhaj, an unindicted co-conspirator in the 1993 World Trade Center bombing who openly calls for sharia to be implemented in the United States.

During a May 8, 1992 speech entitled Stand up for justice, Imam Siraj Wahhaj stated:  “American is the most wicked government of the earth…If they steal cut off their hands.  This is a commandment of Allah…Allah is wise….Son, I love you but I love Allah more. Nobody is above the law (Sharia).”

As we see with most terrorists like this, on June 25, 1991,  Imam Siraj Wahhaj became the first muslim to offer an invocation in Congress.

Let’s break this down:

The entire leadership of the Islamic world is pursuing a line of operation that stands in direct conflict with U.S. founding principles and law. Lucas Morten, Siraj Wahhaj,  Hujrah Wahhaj, Jany Leveille, and Subhannah Wahha abused children, and were involved in the abduction and murder of a 3 year old boy. These crimes are lawful under Sharia.

Judge Sarah Backus concluded the 5 Jihadis were not a flight risk or a threat to the community.

If the FBI or the local police had been trained by UTT (Understanding the Threat) they would understand AG Wahhaj – a handicap child – would be killed when he was abducted.   They would understand these 11 children are being trained to kill under sharia.

If Sheriff Hogrefe or the FBI knew sharia they would have been able to articulate facts leading to probably cause to obtain a search warrant for the compound long before they did.

Then they would have been able to return AG Wahhaj alive to his mother.

Do not allow yourself to feel helpless.  Get involved! Help UTT educate police, judges, prosecutors, and many others who need a dose of the truth.

Bring UTT’s Training to your town.  UTT is the only organization in America with a 3-day program for Police, national guard, and first responders that shows them how to proactively locate jihadis, map out the jihadi network, and create investigative strategies to rip out the jihadi network from your neighborhood.

Support UTT Financially.  Donate on our website to support bringing a training program to your area or to generally support the work of UTT. Sponsor a law enforcement officer or youth to attend UTT’s Train the Trainer program.

We need your help to put freedom back on the offensive where it belongs!