What Are Muslims Taught About Non-Muslims?

“(Unbelievers/Non-Muslims) are the worst of all creatures.”  Koran 98:6 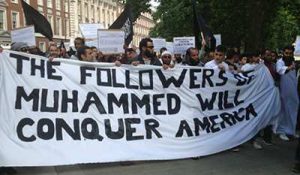 The reason is simple.  Allah commanded his law (sharia) to be the law of the entire earth.  All people must convert to Islam or submit to Allah’s law (sharia).  Islam’s prophet Mohammad said he was commanded by Allah to fight the non-muslims until they testify there is no god but Allah and then Mohammad went out and waged war on non-muslims.

Therefore, muslims can do whatever needs to be done to advance Islam, including lying, terrorizing, and killing.

In the most authoritative reports about what Islam’ prophet Mohammad said, we get:  “Allah’s Apostle said, ‘By Him in Whose Hands my soul is, son of Mary (Jesus) will shortly descend amongst you people (Muslims) as a just ruler and will break the Cross and kill the pig and abolish the Jizya.’” [Bukhari 2222: Book 34, Hadith 169]  Islam teaches the Islamic prophet Jesus will return and cast all Christians into hell for not converting to Islam, and he will kill all the Jews so muslims can enter paradise.

How do we do “interfaith outreach” from a place of “mutual respect” when we actually understand these things?

The Tafsir legally defines every verse in the Koran.  Koran 9:29 states:  “Fight against those who believe not in Allah nor the last day…even if they are People of the Book, until they pay the Jizya with willing submission and feel themselves subdued.”

The Islamic legal definition of “with willing submission” is “in defeat and subservience” and “feel themselves subdued” legally means “disgraced, humiliated, and belittled.  Therefore, Muslims are not allowed to honor the people of Dhimmah or elevate them above Muslims, for they are miserable, disgraced and humiliated.”

This is how Islam views the non-Islamic world.

Please help your pastors, local elected officials, and others – who still have some semblance of common sense – become aware of this information so they can stop falling over themselves to appease the “religion of peace.”

Islam enslaves its adherents to a system which obliges them to view everyone outside of Islam as people to be killed or conquered.  There is very little “common ground.”