The Countering Violent Extremism or CVE is a program created in Britain by the Muslim Brotherhood. 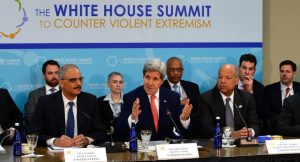 The Muslim Brotherhood is an Islamic jihadi organization whose stated goals in their by-laws are to “Fight the tyrants and enemies of Allah” in order to establish an Islamic State under sharia (Islamic Law).  In North America they do this by waging “Civilization Jihad” by OUR hands to “destroy Western civilization from within.”

CVE is a hostile information campaign and a double-agent program brought from Britain to the United States by FBI and DHS leadership approximately 10 years ago.

CVE’s purpose is to ensure Muslim Brotherhood leaders are exclusively used by the U.S. government as the liaison for all matters pertaining to Islam and terrorism so the MB controls the narrative in this war.

The Chairman of the House Homeland Security Committee, Mike McCaul of Texas, is dutifully fulfilling his obligation to do the Muslim Brotherhood’s bidding and leading the charge to “combat violent extremism.”

Mr. McCaul ensured funding for CVE and pushed to create the Office of Countering Violent Extremism at the Department of Homeland Security.

We face an enemy that exclusively states they are Muslims waging jihad in the cause of Allah to establish and Islamic State (caliphate) under sharia (Islamic Law).

So long as our federal law enforcement and intelligence agencies chase “violent extremists” they will chase U.S. military veterans, white supremacists, and all other sorts of people – but not Muslims committing jihad. 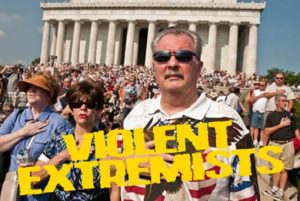 Exactly the intent of our enemy, and exactly the focus of DHS efforts.

As a matter of fact, the former Program Manager for the Department of Defense’s Combating Terrorism and Technical Support Office (CTTSO) and Irregular Warfare Section, Richard Higgins, stated on national radio in June 2016:   “When you look at the deliberate decision-making process of the United States government as it relates to radical Islam, that deliberate decision-making process is controlled by the Muslim Brotherhood.”

CVE is one of the major tools our enemy is using to get and keep our national security apparatus in such a state of strategic incoherence and Congressman McCaul is its biggest cheerleader.

It is also instructive that Mike McCaul has demonstrated an inability to determine friend from foe when it comes to basic terrorist groups like Hamas.  Calling the Council of American Islamic Relations (CAIR) a “moderate” Islamic organization even though evidence and facts reveal CAIR is Hamas, is dangerous and unprofessional when you are the Chairman of the Homeland Security Committee in the U.S. House of Representatives. 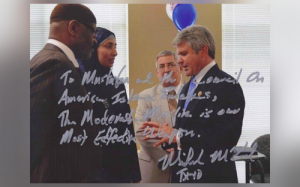 Photo signed by Congressman Mike McCaul for Hamas leader Mustafa Carroll reads:  “To Mustafa at the Council on American Islamic Relations, The Moderate Muslim is our most effective Weapon. Michael McCaul, TX-10”

When a leader like the Chairman of the Homeland Security Committee legitimizes a terrorist (Hamas leader) like Mustafa Carroll – leader of Hamas in Texas – that leader (McCaul) demonstrates his utter incompetence in this war.

Thanks Congressman McCaul.  We can add your name to the growing list of U.S. government officials batting for the other team – whether you understand it or not.