Many jihadi and Marxist organizations frequently publish overtly defamatory and false comments about Understanding the Threat (UTT) and its President John Guandolo.

UTT would like to inject some truth into this situation.

The following is a list of the common attacks UTT endures, followed by UTT’s responses:

“Guandolo has made a career out of…promoting ludicrous Islamophobic conspiracy theories.”

In fact, UTT offers $1000 cash and the removal of relevant material we teach and publish to anyone who can bring something to our attention that is not true about sharia’s authority in Islam and what it says, or about the Muslim Brotherhood’s Jihadi Movement in the United States and their modus operandi.

UTT has made this offer on TV, radio, and in direct emails to U.S. Muslim Brotherhood leadership for over 3 years.

“Guandolo has made a career out of demonizing Muslims…”

UTT believes speaking truth about the evil and barbaric system that is Islam’s sharia brings light to muslims trapped in this system and who are enslaved by it.  This, to us, seems the best way to demonstrate love and compassion to the muslim community, as opposed to calling a barbaric system “good” and “peaceful.”

In fact, sheriffs, police chiefs, and prosecutors have opened cases as a direct result of UTT’s 3-day “Understanding and Investigating the Jihadi Threat” for police, intelligence professionals, and military personnel.  One police officer who attended UTT’s 3-day program identified a wanted Al Qaeda terrorist wanted by the FBI less than one week after the training, and stated UTT’s training was the reason he was able to do so.

“At an event in 2011, Guandolo claimed mosques were fronts for the Muslim Brotherhood.”

Property records, leadership at U.S. Islamic centers/mosques, investigation by UTT, and testimony in federal courts reveal approximately 80% of the over 3000 mosques in all 50 United States are controlled by the U.S. Muslim Brotherhood.  The Muslim Brotherhood calls Islamic centers/mosques the “axis” of their Movement, and their stated objective is to wage jihad to establish an Islamic State under sharia – the same objective as ISIS and Al Qaeda.

“Guandolo was dismissed from the FBI.”

John Guandolo left the FBI on 1 December 2008 after being recruited out of the FBI by the Department of Defense for a significant pay increase and significantly more responsibility.  His departure from the FBI was voluntary and honorable.

In fact, in February 2013, UTT’s John Guandolo was the first to break the story on a TV show hosted by The United West’s Tom Trento discussing U.S. government personnel with direct knowledge of John Brennan’s conversion to Islam when Mr. Brennan was the CIA Station Chief in Saudi Arabia in the 1990’s.  In June 2017, former CIA Station Chief Brad Johnson publicly stated on the Glazov Gang TV show that many people in the CIA told him they heard and knew of John Brennan’s conversion to Islam.

“Among his many bizarre and Islamophobic claims…that Muslims are “obligated” to lie, and that it is “unprofessional” for officials to seek information about Islam from Islamic religious leaders (imams).”

The Um dat al Salik (Reliance of the Traveller) is authoritative sharia approved by the highest authority in Islam – Al Azhar University in Cairo, Egypt.  It states:   “Speaking is a means to achieve objectives…it is permissible to lie if attaining the goal is permissible…and obligatory to lie if the goal is obligatory.”

Therefore, it is unprofessional for a non-muslim to use an Islamic scholar or Imam as the source of understanding of Islam because Islamic scholars and Imams know sharia and, therefore, understand their duty under sharia to lie to police chiefs, pastors, Members of Congress, Presidents, school board officials, and others in order to advance Islam.

Guandolo claims most Islamic organizations in America are a threat.

The largest terrorism financing trial ever successfully prosecuted in American history – US v Holy Land Foundation for Relief and Development, Dallas 2008 – was the culmination of a 15 year FBI investigation.  The evidence in this case reveals there is an “Islamic Movement” in the United States primarily led by the U.S. Muslim Brotherhood.

The evidence also reveals the most prominent Islamic organizations in the United States are a part of this Muslim Brotherhood network whose stated objective is to wage “civilization jihad” until they establish an Islamic state (caliphate) under sharia (Islamic law).

Evidence in the US v HLF trial reveals the U.S. Muslim Brotherhood was ordered by MB headquarters in Egypt to create a Palestine Committee to be a node for the terrorist group Hamas in the United States.  The USMB created four (4) organizations to fulfill this mission, including the HLF and CAIR. 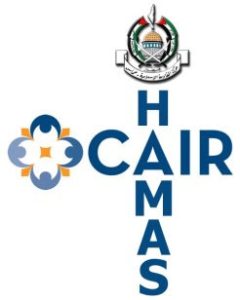 US v HLF and other evidence reveals MB groups in America include, but are not limited to:

UTT encourages our readers and followers not to be angry with our adversaries.  They are doing what they do.  We should pity them that all they have are lies and ad hominem attacks.

They certainly do not have the truth.