UTT Throwback Thursday: US Already Apologizing to the Enemy in Afghanistan – Again 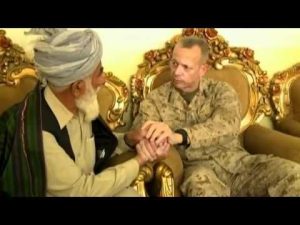 At what point do American citizens call for our military generals to be tried for criminal negligence as well as Aiding and Abetting the enemy for continuing their grossly unprofessional conduct and failure to make the slightest effort to understand the enemy 16 years after 9/11?

This week U.S. Major General James Linder apologized to muslims in Afghanistan for offending them by dropping leaflets containing the image of a dog with the Islamic shahada on it – “there is no god but allah and Mohammad is his messenger.”

Americans have just redeployed to Afghanistan and the United States is already apologizing to Islamic leaders.

Why don’t U.S. leaders man-up and  begin speaking to the Islamic world in language they understand?

How about our leaders tell the Islamic world to end the global jihad or we will obliterate it.

How about our leaders tell Saudi Arabia, Iran, Qatar, and all the other Islamic countries funding the global jihad that if they do not turn the money spigot off immediately, the U.S. will turn their countries into parking lots – and keep their money.

How about our leaders shut down every Islamic school, mosque and organization that teaches jihad, seize the property, and arrest their leaders.

What if, and this is a big IF, U.S. generals actually read sharia and come to understand the enemy so they will realize that apologies from them endanger U.S. troops and emboldens the enemy.

The United States is again surrendering to an enemy we should be decimating.