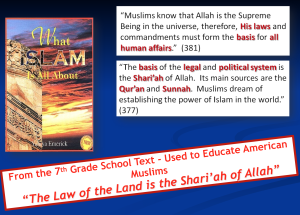 Would it be a problem if ISIS jihadis were teaching in U.S. Islamic schools?

If you answer “Yes” then why is it okay to have the same material ISIS teaches being taught in U.S. Islamic schools?

The text book What Islam is All About is the most widely used 7th grade text book being taught in Islamic schools across America.

In the description of how to use this book, author Yahiya Emerick  explains, “Nearly every statement, paragraph or teaching is followed by reference from the Koran.” 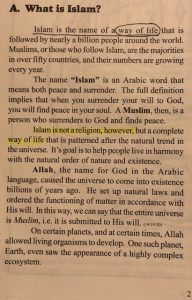 As is taught at the highest level schools of Islamic jurisprudence, What Islam is All About teaches that Islam is not a religion, but a complete way of life governed by sharia (Islamic law).

This textbook for 7th grade children teaches there are 3 duties in Islam:  Dawah, Jihad, and Encouraging Good & Forbidding Evil (“good” and “evil” as defined by sharia).

Dawah is the call or invitation to Islam, and is mandatory before muslims can wage jihad.

“The caliph makes war upon Jews, Christians, and Zoroastrians provided he has first invited them to enter Islam in faith and practice, and if they will not, then invited them to enter the social order of Islam by paying the non-Muslim poll tax (jizya)…and the war continues until they become Muslim or else pay the non-Muslim poll tax in accordance with the word of Allah Most High.” 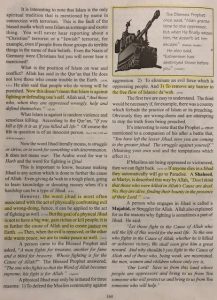 What Islam is All About teaches children that “Jihad” is “most often associated with physically confronting evil and wrongdoing” and the book has a picture of a tank, just in case the children are confused about its meaning.

Ensuring the children understand the duty of jihad in Allah’s eyes, this textbook teaches muslim-American children that those who are killed in jihad are “martyrs” or “Shahids” who immediately go to paradise.

In fact, this is exactly what doctrinal Islam teaches.

The Islamic legal definition of jihad in sharia (Islamic law) is warfare against non-Muslims.

To be clear, U.S. citizens who attend U.S. Islamic schools are being taught to preform Dawah before they wage Jihad, and that both are duties of all muslims.

From What Islam is All About:

“If anyone dies in a Jihad they automatically will go to paradise.”

“Don’t think that those who were killed in Allah’s Cause are dead. No, they are alive, finding their bounty in the presence of their Lord.”  Koran 3:169

What Islam is All About  explains “There is no such thing as terrorism in Islam. Nor can a Muslim ever be a fundamentalist because there is only one way to follow Islam.”

On March 12, 2018, 17 year old Corey Johnson, of Jupiter, Florida, spent the night at a friend’s house he knew for over 10 years.  Yet, Corey killed another boy staying over by slitting his throat, and stabbed his friend’s mother and younger brother before being arrested.

Corey did what he did because, according to him, the Koran commands him to do such things.  Specifically, in this case, to kill those who mock Islam or muslims. 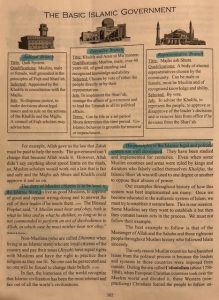 What Islam is All About  explains, the goal of Islam is to promote peace, justice and order in society. This means peace according to Sharia.

It goes on to say “The basis of the legal and political system is the Sharia of Allah” and “The duty of muslim citizens is to be loyal to the Islamic State.”

How is any of this contrary to the teachings of Al Qaeda, Hamas, ISIS, Boko Haram, Abu Sayef, the Muslim Brotherhood, Al Shabaab or any other jihadi organization on the planet?