Remembering America’s Independence in an Era of Tyranny

“We hold these truths to be self-evident, that all men are created equal, that they are endowed by their Creator with certain unalienable Rights, that among these are Life, Liberty and the pursuit of Happiness.–That to secure these rights, Governments are instituted among Men, deriving their just powers from the consent of the governed, –That whenever any Form of Government becomes destructive of these ends, it is the Right of the People to alter or to abolish it, and to institute new Government, laying its foundation on such principles and organizing its powers in such form, as to them shall seem most likely to effect their Safety and Happiness. Prudence, indeed, will dictate that Governments long established should not be changed for light and transient causes; and accordingly all experience hath shewn, that mankind are more disposed to suffer, while evils are sufferable, than to right themselves by abolishing the forms to which they are accustomed. But when a long train of abuses and usurpations, pursuing invariably the same Object evinces a design to reduce them under absolute Despotism, it is their right, it is their duty, to throw off such Government, and to provide new Guards for their future security.”

The Declaration of Independence, July 4, 1776 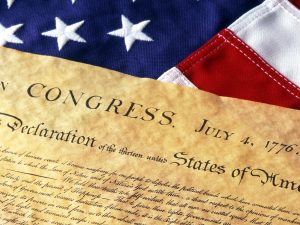 Our liberty, our freedoms – according to the Founders – come from God.  A Constitutional Republic must, as a matter of fact, have a moral standard, and ours always has.  The biblical understanding of right and wrong has defined America’s morality long before our first President was sworn in.  From the Mayflower Compact to how we educated our children in the early 1600’s in Jamestown, the laws and love of God has been at the center of who we are as America.  Our Founders formed a government based on these biblical moral standards which are the fulcrum around which our laws and our system works.  Under this way of life, poisons and threats to our way of life become easy to spot and defeat.  Without moral clarity, victory becomes very hard to maintain and achieve.

On this day, July 4th 2015, let us live up to the standards that our government, laws, and society have been established.

As the threat of the growing Islamic Movement pushes in on decent and civilized society, it is time to stand firm, no matter what the cost.

We have a federal government which has grossly exceeded its authority, violated the law, and demonstrated that individual liberty is not longer the cause for which it stands.

No matter what an individual believes, the underpinnings of this nation were built on a faith in a loving and almighty God whose hand has guided us and made America the great nation it is.  Over the last 50 years, America has turned away from our foundation and we can see the impact on our nation because of it.

We are lost, and our enemies see it.  They believe because we stand for nothing, we are vulnerable.  By failing to stand firm on our founding principles, we are inviting our own destruction and the lives and liberty of our children and grandchildren.  There is nothing “loving” about this.  This is not “tolerance” it is societal suicide.

Lets honor our nation and all of the men and women who have sacrificed so much to defend it over the last few centuries by renewing our individual commitment to liberty and the moral standards that have made us the light on the hill for all the world.