President Trump Should Go With His Gut

By all accounts, President Trump’s gut instincts are far superior to the “knowledge” of his advisors when it comes to the Islamic threat.

In deciding about Afghanistan, the President stated in his August 2017 speech:  “My original instinct was to pull out. And historically, I like following my instincts.”

In the end, his generals convinced him to turn his focus away from the domestic Islamic threat and re-engage in combat operations in Afghanistan.

And where is the designation of the U.S. Muslim Brotherhood as a Foreign Terrorist Organization? 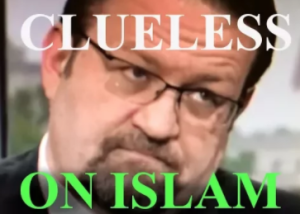 Just this week, the President’s former advisor on terrorism matters, Sebastian Gorka, spoke on CSPAN and said, “There isn’t one monolithic version (of Islam)…What we have today is a 7th century atavistic, blood-curdling one in the form of ISIS or Al Qaeda…and then we have the progressive modern versions.”

This is incoherent and factually wrong.

This lack of understanding among senior advisors to the President is exactly why the United States continues to have little impact on the Global Islamic Movement, even while the U.S. military is killing Islamic State fighters overseas.

You cannot defeat an enemy you refuse to identify and define.

There is one Islam and one sharia.  The fact that sharia is implemented in different stages and to differing degrees in different nations does not constitute “many versions” of Islam.

Muslims are obliged to impose sharia to the greatest degree possible in each area around the globe, and that is exactly what the Global Islamic Movement is doing.

See the UTT video from February 2017 calling National Security Advisor Herbert McMaster and Sebastian Gorka “Unfit for Duty” because of their ignorance of Islam and sharia HERE.

As UTT continues to make clear, any individual or organization which perpetuates the lie there are competing “versions” of Islam, is providing our enemy room to maneuver in the Information Battlespace and, therefore, their efforts are destructive and hostile to the United States regardless of the intent.

In this war, bold truth about the Islamic threat spoken clearly with well-defined language is the best weapon against a sea of propaganda, disinformation, and deception.

President Trump understands at a gut level Islam is the problem.  He should stick with that and lead accordingly.