Pedophiles Do Not Get to Hide Behind “Religious Freedom”

American are always justifiably horrified when those in authority over children grossly abuse their positions and mistreat the children.  The sex abuse scandal by some Catholic Priests is a recent example.

But where is the outrage about the accepted and lawful practice of pedophilia in Islam?   Perhaps Americans are not shocked because they are unaware that sharia (Islamic law), which is the law muslims are required to follow under penalty of death, allows muslim men to marry young girls.

Why?  Because Islam’s prophet Mohammad is the al Insan al Kamil – the perfect example of a man – in Islam and he married a six (6) year old (Aisha) and consummated the relationship when she was nine (9).

“Ye have indeed in the Messenger of Allah a beautiful pattern of conduct for any one whose hope is in Allah and the Final Day, and who engages much in the Praise of Allah.”

“The Prophet engaged me (Aisha) when I was a girl of six years…Unexpectedly Allah’s Apostle came to me in the forenoon and my mother handed me over to him, and at that time I was a girl of nine years of age.”  (Bukhari volume 5, book 8, hadith 234, narrated by Aisha)

Mohammad is the perfect example, therefore, it is a capital crime in Islam to suggest any of his behavior is wrong.  Unfortunately, in the United States an adult male marrying a six or seven year old is illegal and we put people in jail for it.

This is one glaring place where sharia and U.S. law contradict at the ground level, and why sharia cannot be tolerated.

For muslims and their collaborators  to defend pedophilia under the guise of  “religious freedom” is disgusting and absurd on the face of it.

U.S. Islamic school texts also teach “The law of the land is the sharia of Allah…Anyone who dies in jihad automatically goes to paradise..The duty of Muslim citizens is to be loyal to the Islamic State.”

America was founded on one primary principle: our liberty comes from God.  “We hold these truths to be self-evident, that all men are created equal, that they are endowed by their Creator with certain unalienable Rights, that among these are Life, Liberty, and the pursuit of Happiness.”

No man nor government has the right to take our liberty from us because God gave us these rights.  We have a duty and an obligation to defend them.

America is the longest standing Constitutional Republic in the history of the world! We need to fight for it!

If we truly love all people, then we have duty to defend innocent muslim children from predatory behavior that is accepted and lawful under sharia.  This is abuse at so many levels inside the Islamic community. 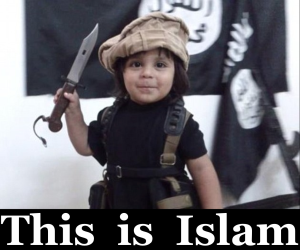 Encourage people to Understand the Threat.

If you can take time to explain that Islam is the problem, you might be surprised and they might open the door to engage in a conversation.

Share UTT’s Research and Resources page and encourage other to follow UTT.  We must work to get others to understand Islam/sharia is the threat.

The most important thing we can do is speak truth boldly in love about real threats.

Join us at Understanding the Threat as we put FREEDOM back on the offensive where it belongs.