Our Lady of Victory

Today, October 7th, the free West celebrates and remembers that on this date in 1571 the last great naval battle of oared ships took place in the Gulf of Corinth (Greece).  Known as the Battle of Lepanto – where the Muslims had their fleet – this was the first defeat of the Muslim Turks at sea by Christian forces.

In the 16th century, the Islamic Caliphate – the Ottoman Empire – was continuing it’s incursion and expansion into Western lands, including the Mediterranean and more of Europe.

In May 1565, the Ottomans laid siege to the island of Malta (due south of Sicily) with 250 ships carrying 40,000 Muslim fighters.  Malta was defended by 700 Knights of the Order of Saint John of Jerusalem (Knights Hospitallers) and approximately 8,000 Maltese troops.  For four months the Christian forces defended Malta and inflicted large casualties on the Ottoman Turks, who finally fled when reinforcements arrived.  Thereafter, the Knights carried the title the “Knights of Malta.”

The Battle of Cyprus

In the spring of 1570, the 4th Ottoman-Venetian war began when the Muslim Turks attacked Cyprus with 70,000 men.  The Venetians appealed to Pope Pius V to come to their defense.

The Christian defenders of Cyprus were outnumbered by a margin of almost 7 to 1.  The city of Nicosia held for nearly two months but, having been reduced to 500 soldiers, surrendered.

Venetian soldiers in Famagusta fought on for nearly a year, but on August 5, 1571, Cyprus fell.

The Muslims beheaded the Venetian commanders and hung their heads on the mast of their ships.

On August 17, 1571, The Venetian governor/commander, Marco Antonio Bragadin, was humiliated, tortured, and flayed alive.  Mustafa had Bragadin’s body stuffed with hay and hung on the mast of his ship.

On May 25, 1571, while these battles were raging in Cyprus, Pope Pius V formed the Holy League with forces from the Papal States, the Habsburg States in Italy and Spain, monarchies of Tuscany, Savoy and elsewhere, the Knights of Malta, and others, in order to defend Cyprus and push back the Islamic forces.

The Battle of Lepanto

In September 1571, the Holy League’s fleet assembled at Messina, Sicily with 206 galleys and 6 smaller ships, manned by 40,000 sailors carrying approximately 27,000 soldiers.  The Holy League sailed for Corfu on September 16th with John of Austria commanding (in the center), Agostino Barbarigo on the left, Italy’s Admiral Giovanni Andrea Doria on the right, and, from Spain, Álvaro de Bazán in reserve.

The Muslim fleet was commanded by Ali Pasha (center), Alexandria’s governor, Mohammed Saulak (right), and the Pasha of Algiers Uluch Ali on the left.  The Turkish fleet flew the green standard with the word “Allah” embroidered over 29,000 times on it.

The Holy League’s Battle Standard was given to them by Pope Pius V and carried the image of the crucified Jesus on the Cross on it.

On the eve of battle – October 6th – Priests on the Holy League’s vessels held Mass, heard confessions, and prayed with the men.  Knowing the Turks had never been defeated on the sea, the men of the Holy League prayed the Rosary and asked Mary, the Mother of God, to pray for them.

Across Europe, people had been praying for months, and the Pope called for all Christians to pray the Rosary for victory.

It is said that on the day of battle, John of Austria went from ship to ship with a crucifix encouraging the men to keep their faith strong in the face of this impending engagement.

The tactics of the day were to engage the enemy ship to ship, lash them together, and fight close hand to hand combat.

On October 7, 1571, the Battle of Lepanto began with the Holy League’s guns ripping down the masts of Turkish ships and doing great damage before the fleets came in close range.

John of Austria’s Real and Ali Pasha’s Sultana – the flagships for each force – collided together.  Fierce fighting ensued and finally subsided when Ali Pasha was shot dead and the Holy League standard was raised over the Sultana. Even though the Muslim center was collapsing, the battle raged on.

In the end, the Christians were victorious.  The Holy league captured 117 galleys and thousands of men, liberated over 12,000 enslaved Christians, and sank or burned about four dozen enemy galleys.

Across Europe celebrations ensued as news of the victory spread throughout the land.  Great works of art were commissioned to memorialize the victory at Lepanto. 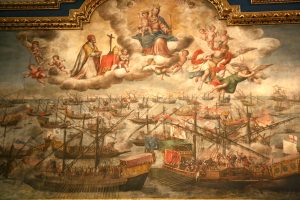 Miguel de Cervantes, the author of Don Quixote, was wounded in the battle.  He wrote the Battle of Lepanto was “the most noble and memorable event that past centuries have seen.”

While Venice later surrendered to the Islamic fleet in 1573, the victory at the Battle of Lepanto ensured the Islamic domination of the Mediterranean was over for the time being.  It also gave Europe a much needed boost in morale after centuries of war with the invading Muslims.

Since Mohammed first launched jihad in the early 7th century, the free Christian West has been at war with the Islamic forces who continue to kill and impose slavery on Muslims and non-Muslims alike.  Were it not for key victories against the Islamic armies over the last 1400 years, the lamp of freedom would be dim today.

The first war America fought after our Revolution was against the Muslim (Barbary) states, when Thomas Jefferson ordered the Marines to deal with the Islamic forces which were capturing American vessels on the seas and taking Americans prisoner.  America defeated the Muslims in these now-famous engagements.  But we have forgotten our history.

Today, the world watches the continued incursion by Muslim forces into sovereign nations where tens of thousands are murdered in gruesome deaths.  Women are systematically raped and disfigured.  Homosexuals are thrown from buildings to their deaths.  Nations are being overthrown.  From Central and East Africa to the Philippines to Thailand, across Europe and throughout the Middle East and Asia.  The armies of Mohammed are again marching to conquer the globe.

Their stated goal:  to re-establish the Caliphate and impose Sharia (Islamic Law) on the world.

In Europe and America, we are told – especially by political and religious leaders – that we should be more tolerant of the Muslim faith which, they say, is a “religion of peace.”

Today, October 7th, we remember and honor all of those who fought for liberty against the forces of evil and slavery.  We remember the prayers that delivered the Holy League a great victory over the Ottoman Turks.

And we pray that Liberty will go back on the offensive where it belongs.

Leave a Reply to The Battlefield, October 9, 2015 | The Hayride Cancel reply