Islamic Jihadis Recruiting America’s Youth – What will You Do?

The stated objective of the International Muslim Brotherhood (MB) is to establish an Islamic State under Sharia.  Their official By-Laws can be found here at the UTT website, and they state:

The indictment of the Holy Land Foundation for Relief and Development (HLF) in November 2001 was the culmination of a 15 year FBI investigation and produced a mountain of evidence revealing there is an “Islamic Movement” in the United States.  This Movement is primarily led by the U.S. Muslim Brotherhood, and ALL of the prominent Islamic organizations in America are a part of this Movement.

The US v HLF trial was the largest terrorism financing trial ever successfully prosecuted in American history.

HLF was the largest Islamic charity in America, and it was a terrorist organization.  Specifically, it was a Hamas front.  Hamas is an inherent part of the Muslim Brotherhood, and is a designated Foreign Terrorist Organization per the U.S. government and several other governments.

The  Muslim Brotherhood’s By-Laws also explain how the MB will accomplish these goals: “Make every effort for the establishment of educational, social, economic and scientific institutions and the establishment of mosques, schools, clinics, shelters, clubs as well as the formation of committees to regulate zakat affairs and alms.”

The U.S. Muslim Brotherhood has followed this model creating thousands of organizations in America over the last 60 years.

The MSA is one of the most prominent Islamic organizations in America today.

See the video of the MSA pledge calling for jihad here.

The Muslim Brotherhood’s Arabic website says it is waging a “long and unrelenting jihad” against the West.   In 1992, after the MB’s strategic plan (An Explanatory Memorandum) and their plan to implement the strategy (Implementation Manual) were published, Islamic organizations were created which exactly matching the Implementation Manual’s plan.  In other words, the Muslim Brotherhood created and continue to create the organizations they say they need to achieve victory here in North America.

The victory they seek is “a kind of grand jihad” and calls for “Civilization Jihad” to “destroy Western civilization from within.”

The MSA is a leading organization in achieving this strategy.

There are several examples of suit wearing Jihadi’s working with and recruiting America’s youth.  Here are a few:

Anwar al Awlaki was killed by the U.S. in a drone strike in 2011.  He was the leader of Al Qaeda in Yemen, a prolific recruiter of young people for jihad.  When Awlaki was not teaching/briefing inside the U.S. Capitol about Islam’s prophet Mohammad or leading Islamic prayers, he was briefing government officials in the Pentagon.  Awlaki was the President of the Muslim Students Association at Colorado State University. 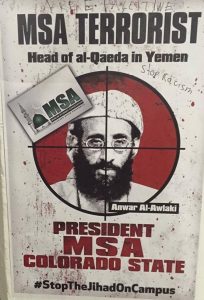 Abdurahman Alamoudi – created and/or led nearly two dozen of the largest Islamic organizations in North America, was a “Good Will Ambassador” for the U.S. Department of State, created the Muslim Chaplain program for the Department of Defense, worked with the Department of Education to determine what went into American public school texts discussing Islam, and was the senior Islamic advisor to President Bill Clinton. Alamoudi was arrested at London’s Heathrow Airport in 2003 with $340,000 cash he received from the Libyan government for the global jihad.  Alamoudi told British officials he found the suitcase outside his hotel room.  He was extradited to the Eastern District of Virginia (Alexandria) where he pled guilty to an 18 count indictment.  Alamoudi was a financier for Al Qaeda who now sits in federal prison.

Suhail Khan – Prolific suit-wearing jihadi Suhail Khan was in the White House on 9/11.  After officials discovered his father, Mahboob Khan was a prominent Muslim Brotherhood leader, Suhail was moved out.   He soon came back inside the U.S. government, serving two Secretaries of Transportation in the Bush administration.  This gave Suhail Khan a security clearance and access to America’s infrastructure.  Mahboob Khan is one of the founders of the Muslim Students Association in the U.S.

The Muslim Brotherhood created the first MSA in 1963 and since that time have followed their by-laws by creating educational, social and economic organizations to invest in their future leaders.  The MB has detailed plans and are working daily to achieve their goals of overthrowing the U.S. government and replacing it with an Islamic State.  Islamic law has already found its way into our daily lives, schools and government.

They’ve told us and are showing us they will take over our county and implement Sharia Law.  They are using American college and high school campuses to recruit supporters and jihadis.

Are we going to let this continue?

It is time we take back our county, our schools and our government!  Its time we invest in OUR youth.

UTT  is dedicated to educating and training America’s youth.

UTT’s upcoming “Train the Trainer” program next month has a number of students aged 17-21 attending who are dedicated and fired up to deepen their knowledge and understanding of the Islamic threat, but they need your help.  They need Americans to partner with them and provide financial assistance so they can take the fight to the enemy in their high schools, college campuses, and in their communities.

UTT is the first organization to provide this training to America’s youth.

If you would like to sponsor a student in this training, your tax deductible donation can be given via UTT’s website HERE.

To sponsor one or more of these students, you may donate via the website ($3200 each) or contact us at info@understandingthethreat.com.

We need all hands on deck to take this fight to the enemy and put freedom back on the offensive where it belongs!