Throwback Thursday: Jihadis All Want One Thing – Sharia in the Land 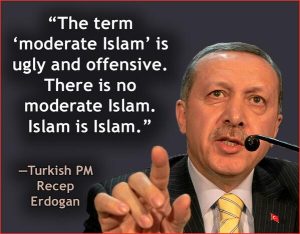 Propaganda to support the Islamic Movement’s strategy comes from a variety of sources.  “Moderate muslims” are one of the most dangerous groups which continues to be pushed to the forefront by well-meaning people as the “saviors” of this war.  When “moderate muslims” discuss Islam and deny the legal requirement for muslims to wage war against non-muslims,  they either lack an understanding of Sharia or they are lying.

In Islam, muslims who do not follow the doctrine of Islam – sharia – are considered apostates and are subject to capital punishment.

In the United States, “moderate” muslims are exclusively entrusted to “educate” local, state and federal leaders about Islam.  Yet, over 17 years after 9/11/01, America’s leaders remain catastrophically unaware of the basic teachings of Islam.  This speaks volumes about what “Islamic advisors” and the “moderate muslims” are actually teaching.

Suit-wearing jihadi like Mohamed Magid, Sayyid Syeed, and Salam al Marayati – all Muslim Brotherhood/Hamas leaders – are warmly welcomed into churches, government offices, and public functions.  Muslim police officers around the county train their fellow officers and their community that the problem is a “few radicalized” muslims.

Yet, all authoritative Islamic law (sharia) obliges jihad until the world is under Islamic rule.

So it is not surprising another jihadi was arrested in Broward County.

Tayyab Tahir Ismail, a naturalized citizen from Pakistan living in Pembroke Pines, Florida, was arrested on 12/15/18.  Ismail was charged with Title 18 U.S.C. 842 (p)(2), “Distributing Information Pertaining to in whole or in part, the Manufacture or Use of Explosive, Destructive Device, or Weapon of Mass Destruction with the intent that the information be use for, or in furtherance of, an activity that constitutes a federal crime of violence.”

On five (5) occasions between  7/15/18 – 9/ 17/18 Ismail posted step-by-step instructions on how to construct a bomb and other explosives in an internet messaging platform.  Ismail posted support for the Islamic State at the same time he was being watched by the FBI.

One of the messages Ismail posted stated, “To all our brethren  who live in Dar al-Kuffur and who cannot make hijra to the Islamic state… strike the enemy in their own land of infidelity… kill them where you will with them…But if you can not participate in the jihad on land of the caliphate, you can do the jihad at the gates of the infidels…Allah will be pleased.Remember our brothers who responded to the call in the West and Europe – in Orlando,Florida, in the country that leads the cross-coalition where more than 50 sodomites were eliminated …you were surrounded by methods to hit them… kill the devil’s soldiers without hesitation.  Make them bleed even in their own homes.”

This last message referred to the Jihadi attack by Omar Mateen at the Pulse nightclub.  The FBI reported Ismail was a prolific poster in the messaging platform system with over 1,500 posts in November 2018 in an Islamic state chat room.  This chat room includes posts of ISIS news publications, instructions of dealing with explosives and also serves as encouragement to conduct Jihad.

A document Ismail posted on July 12, 2018 from Al Qaeda leader Anwar al-Aulaqi- killed in a 2011 U.S. drone strike – stated, “Jihad today is obligatory on every capable Muslim. So Muslims who want to please Allah, it is your duty to find ways to practice it and support it.”

Ismail was well known to the FBI in 2010, when he claimed he was an  al Qaeda solider while at a homeless shelter and threatened to “blow it up.” After he was insulted by a female he said, “we throw women like her in the ditch.” In 2010 Ismail discussed with an FBI source how to make a bomb with baking soda, metal and a few other items.

In 2016, Ismail’s roommate James Medina was arrested in Aventura county (bordering Broward county) and is serving a 25-years prison sentence for 18 U.S.C 2332 a(a)(2) Attempted Use of a Weapon of Mass Destruction. Ismail and Medina lived together in Florida when Medina was planning to blow up a synagogue and Jewish school. Ismail knew of Medina’s plan to attack the synagogue and did not alert police.

During this time, an FBI informant reported Ismail had disdain for the United States and desired to travel to live in the Caliphate. Ismail regularly listened to Anwar Al-Aulaqi’slectures, and said he would commit jihad saying, “Hypocrisy is when one refuses to go Jihad.”

In December 2017, Ismail returned to the US from Pakistan and had 3 digital copies of Dabiq magazine in his possession, hadiths supporting jihad, al Qaeda training manuals and videos of jihadi operations.

All Islamic sources – from the gold standard of Islamic jurisprudence in the world (Al Azhar in Cairo, Egypt) to Islamic elementary and junior high schools – define Islam as a “complete way of life governed by sharia.”

Tayyab Tahir Ismail understands sharia and has been educating others about sharia.

When UTT teaches about Islam and jihad, we do so using only Islamic sources used in mosques and Islamic schools across America.  If that is not good enough for you, listen to Tayyab Tahir Ismail or Omar Mateen or to Anwar Al-Aulaqi or any other Islamic scholars or jihadis who all want to establish Allah’s law (Sharia) on the earth – which includes America.

All Islamic law defines Jihad as warfare against non-muslims and its obligatory for muslims to commit Jihad until Sharia is the law of the land.  There is one Sharia and one Islam.  UTT tells you the same truthful message the jihadi’s are telling. Will you listen?