Jihad in South Dakota – Muslims Threaten, Officials Do Nothing 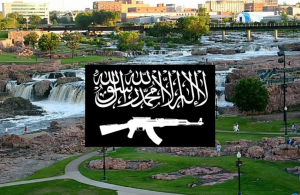 Last Sunday evening, April 9, 2017, over 500 people gathered for the Worldview Weekend Rally in Sioux Falls, South Dakota.  The Muslim Brotherhood threatened, a Muslim showed up in what was a possible thwarted attack, and local officials did nothing.

This is how America will lose this war if it does not change course immediately at the local level.

The Sioux Falls Police Department notified the speakers, radio personality Brannon House and Shahram Hadian, a former Iranian muslim who is now a Christian pastor, that the Islamic Center of Sioux Falls filed a permit to protest the Worldview Weekend Rally event because they viewed the event as bigoted and Islamophobic.

The property for the Islamic Center of Sioux Falls is owned by the North American Islamic Trust (NAIT), meaning it is a part of the Muslim Brotherhood’s jihadi network in America waging “Civilization Jihad.”

At the event on April 9th, a muslim man entered the event while filming on Facebook Live.  He filmed a Koran he was holding in his hand, scanned/filmed the audience with his phone, and was then stopped by security/police because filming was not permitted.  He told them he was leaving, and then lied to them and said his name is “John Smith.”  In fact, the man’s name is Ehab Jaber.

On Jaber’s facebook page it is clear he is anti-police and pro-sharia (Islamic Law).  During his video of the event in question, he made very derogatory remarks about those in attending.

On video, Jaber proceeded to his car where he filmed several weapons including  3 pistols and two rifles.  While brandishing the weapons Jaber commented, “be terrified.”

It should be noted two South Dakota legislators were in attendance at the event.

The good news is that within hours of the event, Jaber was visited by two FBI agents.  The problem, he is still free on the streets of Sioux Falls.

The other problem is the FBI has interviewed nearly all of the jihadis who have killed Americans in the last several years declaring them “not a threat.”

Organizers of this event have been told the local prosecutors are refusing to charge Jaber with any crime.

Stay updated on this ongoing incident by checking out Worldview Radio’s website.

These incidents are occurring all over the United States with similar results.  This comes from a lack of training of police officers, prosecutors, and judges at the state and local level.

As a direct result of UTT training, terrorism cases have been opened and in one case – only a couple weeks ago – an Al Qaeda operative was identified and is now under investigation.

This is the value of UTT’s training and the importance and immediate need for it in every state in the U.S. UTT is the only organization in America providing this training to law enforcement.

We will win this war at the local level.

Do your part to bring UTT to your town today!