Mr. Miller did not randomly arrive at the conclusion that muslim men with sharia-adherent beards described as “religious” by their friends and family who then kill Americans while screaming “Allah u akbar” have “nothing to do with Islam.”

This incoherence is the intentional outcome of the Islamic Movement’s decades-long influence operation in the United States.

UTT frequently identifies significant penetrations of our system at the highest levels.  It is our intent today to give one specific example of how the reliance by U.S. officials on muslims to tell them about the threat of “terrorism” has led to America’s utter failure in this war and an inability to coherently deal with this threat.

In 1998, John Miller interviewed Osama bin Laden in Afghanistan for ABC News.  A brief clip of that ABC report can be found here.  John Miller was then vaulted to serving as the FBI’s Assistant Director for Public Affairs.

Let us go back to October 5, 2006 inside FBI Headquarters Bonaparte Auditorium.  The FBI’s Assistant Director for Counterterrorism Joe Billy and the Assistant Director for Public Affairs John Miller hosted a presentation by Dr. Irfan Shahid from the Prince Alwaleed bin Talal Center for Muslim-Christian Understanding at Georgetown University. 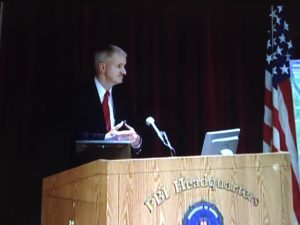 Prince Alwaleed bin Talal, besides being one of the richest men on the planet and previously having a seat on the boards of Time-Warner-AOL and News Corp through which he has significant impact in the enemy’s influence operation, is also a huge funder of the global jihad.

However, Dr. Shahid’s words speak for themselves.

The presentation began with John Miller glowingly introducing Dr. Shahid followed by Shahid providing a brief history of Islam.  He quickly discussed Islam’s growth from Mecca to Medina and then jumped to World War I, at which point he blamed the current jihad Against the entire world on Western imperialism/colonialism.  He made it clear that if non-muslims stop interfering in muslim affairs, the jihad would end.

Technically he is correct.  If we all submit to Islam and live under sharia, the jihad will end.

Responding to a question from a Special Agent serving on FBI Headquarters Executive Staff asking why the muslim community is not rejecting Al Qaeda like right-thinking Americans have rejected groups like the Ku Klux Klan, Shahid said:

“When you draw a comparison between the Ku Klux Klan and Al Qaeda this I think is not a fair comparison.  Because the Ku Klux Klan you refer to is racist, and I think that the Al Qaeda is not racist.  The Al Qaeda is a religious organization which believes that the faith and the people to which they belong have belong…You have to go to the causes and withdraw the causes (for Al Qaeda’s violence).”

Al Qaeda is a religious organization.  So, just submit to sharia and the Islamic Movement, and everything will then be fine.

Shahid continued:  “From the point of view of Islam, the “suicide bomber” is a martyr.  I mean from his point of view he is a pious man who reads his Koran and who feels so much injustice has been done to his people, and his duty is to express his discontent.  He is not a soldier in a well-organized army where he can go to the battlefield and fight. He can do it individually.  So this is what he does.”

At the end of the Q & A, I asked the last question.  I summarized everything I heard during the presentation.  Al Qaeda is a religious organization.  “Suicide bombers” are Islamic martyrs and are justified in their conduct.   America is to blame for Al Qaeda’s actions and the muslims who blow themselves up killing innocent men, women and children.

I asked if maybe the problem might be that muslims are teaching what Al Qaeda says are requirements in Islam to children in Islamic schools and organizations across the globe.  Shahid again reiterated Al Qaeda is a “religious organization” and they do what they do because they feel “helpless” and have no other recourse.

Before it was all over, two FBI Assistant Directors presented the suit-wearing jihadi Shahid with the Jefferson Cup, in honor of Thomas Jefferson. 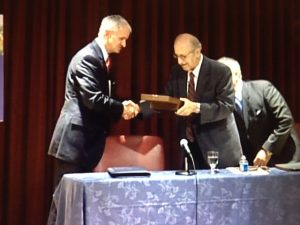 You can’t make this stuff up.

The audio for these exchanges can be found on UTT’s weekly radio show here.  UTT encourages you to take the time to listen.

In the end, John Miller is simply one example of how not reading sharia for yourself and delegating the responsibility to “know all enemies” to a third party – who happens to subscribed to our enemy’s ideology – always results in catastrophic failure.

Abdurahman Alamoudi (in prison) was the senior Islamic advisor to President Clinton and was an Al Qaeda financier.

Anwar al Awlaki was called the “new face of moderate Islam” by the media, and was killed in 2011 by a U.S. government drone because he was the Al Qaeda leader in Yemen.

Senator John McCain traveled to Syria and met with people he called friends and allies who were actually jihadis.

In open testimony on Capitol Hill, Director of National Intelligence James Clapper described the Muslim Brotherhood as a “secular” organization which “eschewed” violence.

The facts indicate U.S. leaders are incapable of discerning friend from foe.  The most dangerous foes are the suit-wearing jihadis who sit inside our intelligence and national security organizations giving direct input into U.S. national security decisions.

This is why we lost the wars in Afghanistan and Iraq despite the fact the U.S. military crushed the enemy on the battlefield.

And it is why the NYPD’s John Miller says all of the attacks we are witnessing have “nothing to do with Islam.”