Is There a Double Standard Favoring Jihadis?

Al-Nabulsi is a Syrian Sheikh who calls for the killing of gays and Jews.

ICNA (Islamic Circle of North America) was identified by evidence in the largest terrorism financing trial ever successfully prosecuted in American history – US v Holy Land Foundation for Relief and Development, Northern District of Texas, 2008 – as being a part of the U.S. Muslim Brotherhood’s Islamic Movement with the stated objective of waging “Civilization Jihad” to overthrow the U.S. government and establishing an Islamic State under sharia (Islamic law).

Why did the local government approve this event and why did local police/sheriff’s offices provide security for this event?

When a local camera crew opposed to the event showed up, the police were quick to threaten arrest for trespassing.  Why?

Local elected officials and police swear an oath to protect and defend the Constitution against seditious threats like this. 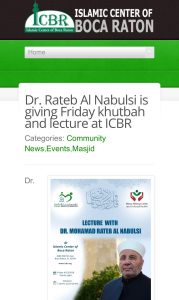 Will Greenwood Lakes Middle School in Orlando invite Understanding the Threat (UTT) to teach a session on American’s Founding Principles?   How about classes on the Muslim Brotherhood network in Florida, sharia, and the threat these pose to local Florida communities?

UTT is still waiting for a response to our call. 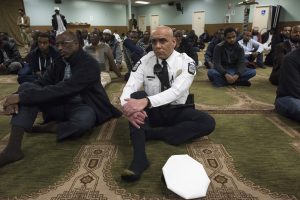 Middletown (PA) Patrol Officer Mark Hovan was suspended  for 10 days for attending Catholic Mass at the Blessed Virgin Mary Catholic Church during his patrol shift.  Yet, would the Middletown Police Chief have an issue if muslim officers when to prayers at a mosque?

Has the LAPD suspended them and launched an investigation as to why their officers are associating themselves with a jihadi mosque?

Is it unprofessional for police departments to have different standards for Christian officers and muslim officers?

Is it legal for police departments to have different standards for Christian officers and muslim officers?

Muslim Capitol Day occurs all over the United States every year, and local/state police protect the participants despite the fact the events are hosted by Hamas doing business as CAIR and advance the jihadi agenda of Civilization Jihad.

What should police officers do when they are given an unlawful order to support a designated terrorist organization and it’s events?

Nor did his terrorist affiliation prevent El-Sharkawy from founding and serving on the Arizona Police Muslim Advisory Board.  In fact, El-Sharkawy currently serves as a board member on Hamas’ (CAIR-Arizona) Board of Advisors.

Do police departments in Tempe, Arizona and elsewhere have Christian Advisory Boards?

Citizens where are you?  Why are you putting up with these double standards?

1. Evidence in the US v HLF trial reveals CAIR is Hamas.

2. Two weeks ago the seditious and terrorist-supporting Southern Poverty Law Center (SPLC) gave its marching orders to the terrorists from Antifa to threaten venues which resulted in those venues canceling programs involving Understanding the Threat (UTT).

3. When UTT conducts it’s 3-day “Understanding and Investigating the Jihadi Network” program for police, the unanimous response from attendees , including FBI counter-terrorism agents, is shock because they admit they were not aware of the information presented.  Yet, they also state the information UTT presents is “critical” to protecting their communities.

Local police sometimes act in inappropriate and unlawful/unconstitutional ways in these matters because they do not understand this threat nor are they trained on how to respond.

The FBI has not informed them.

No police chief wants to deal with a riot or threats of violence.  The easy route is often to support the shutting down of events instead of dealing with the consequences of the event.  However, police chiefs, sheriffs and the men and women in those departments swear an Oath to protect and defend against “all enemies, foreign and domestic.”

This is where we fight this war – by standing firm, even when it is very difficult.  But this means citizens must encourage and stand with the police when these tough decisions come down the line.

Citizens – don’t stand around and watch!

Question your local officials why they allow local facilities and state houses to be used to advance the jihad by designated terrorists (Hamas/CAIR) and known subversive groups, and tolerate a double standard when it comes to the muslim community, even among police.

Citizens get involved – Tell your local police leaders you want those sworn to protect you to be trained about this threat and support them when they have to deal with the heat from sedition/Marxist organizations and their jihadi task-masters like Hamas doing business as CAIR.