Is it treason for a Public Official to publicly laud an enemy of the United States?  The DHS Secretary Jeh Johnson did so last week. 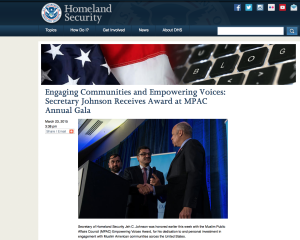 At the “Empowering Voices” conference (3/20/2015) held by the U.S. Muslim Brotherhood’s Muslim Public Affairs Council (MPAC), U.S. Department of Homeland Security Secretary Jeh Johnson was not only given an award by our enemy for his outreach and engagement activities with them – for which DHS brags – he said, at the event, “The reading of the Quran reminded me of two things that MLK said a lot, which are quintessentially American values.”

Secretary Jeh Johnson is the same guy who declared the “War on Terror” over in 2012.

It seems that Sedition, Treason, and Aiding and Abetting the Enemy are all in play here.  Where are the calls to the Department of Justice from our elected officials to charge Secretary Johnson?