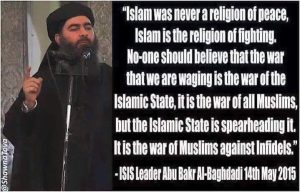 This war of the Global Islamic Movement versus the Free World is primarily a war of narratives.

One narrative says what ISIS, Al Qaeda and all of the other jihadi organizations are doing has nothing to do with Islam.

The other side of this coin is called truth.

As UTT has documented in articles here, here, here, here and here and in videos here, here, and here, there is only one Islam and one sharia.  All sharia mandates jihad until the world is under Islamic rule, and sharia only defines jihad as “warfare against non-muslims.”

There is no other “version” of Islam. 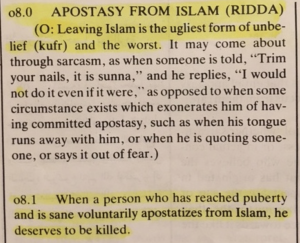 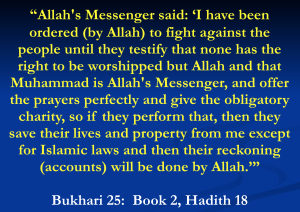 The heads of state of all 56 muslim nations on earth are party to the OIC (Organisation of Islamic Cooperation), which approved the Cairo Declaration on Human Rights on Islam and served it to the United Nations in 1993.  The Cairo Declaration officially states the Islamic world legally defines “Human Rights” as the imposition of sharia on the entire world.

Therefore, the leaders of all Islamic nations on earth have the same understanding of human rights as ISIS and Al Qaeda. 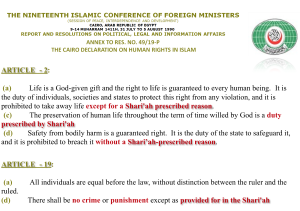 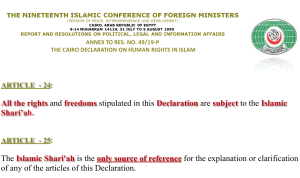 The Islamic Movement’s primary strategy is to control the narrative about Islam in order to keep the very people who need the truth to do their jobs ignorant about Islam.  This includes leaders in the key sectors of our society:  political, media, educational, religious, national security, military and law enforcement.

Propagating a counter-factual understanding of Islam allows the enemy to wage Civilization Jihad by OUR hands, and get our leaders to do their bidding for them.

In 2005, the U.S. government wrote the constitutions for Iraq and Afghanistan creating Islamic republics under sharia.  We did that and in the process achieved Al Qaeda’s goals for them.  That is Civilization Jihad by OUR hands.

Propaganda to support the enemy’s strategy comes from a variety of sources.  “Moderate muslims” are one of the most dangerous groups which continues to be pushed to the forefront as the “saviors” of this war.

The first prominent “moderate” muslim in America shoved down our throats was Abdurahman Alamoudi, who was the Islamic advisor President Clinton who created the muslim chaplain program for the Department of Defense.  Alamoudi turned out to be an Al Qaeda financier involved in a plot with Al Qaeda operatives to kill Saudi Prince Abdullah.  He is in jail now.

The next muslim we were told by the media was the “new face of moderate Islam” was Anwar al Awlaki. When he was not giving talks about Islam at the U.S. Capitol and the Pentagon, he gave Islamic legal counsel to 9/11 hijackers, Major Nidal Hassan (Ft Hood jihadi), and others, and was the leader of Al Qaeda in Yemen.   The United States killed him with a drone strike in 2011.  He is dead now.

Now we have “moderate” muslims all around us being used to “educate” our leaders about Islam.  We have suit-wearing jihadis like Mohamed Magid, Sayyid Syeed, and Salam al Marayati, who are all Muslim Brotherhood/Hamas leaders, warmly welcomed into churches, government offices, and public functions.

Then we have Raheel Raza, Qanta Ahmed, Zuhdi Jasser and others who propagate the message that “their version of Islam” does not condone what the “terrorists” says it does.  They tell us they are “devout Muslims” who are “anti-sharia.”

This is irreconcilable nonsense.

The difference is that leaders of the Muslim Brotherhood, no matter how nice they dress or talk, are enemies of the United States and should be treated as such.

Raheel Raza may truly believe what she says and may be a pleasant woman.  The point is that her message supports the enemy’s narrative.  Since this is primarily a war of narratives, that puts her in the enemy camp, even if she does not intend to be there.

The emotional connection many Americans have to the likes of Raza and the others make the truth of this reality difficult for some to swallow.  Nonetheless, it is the truth.  Some are unable to detach their emotions from their intellect and see that to be a tool of the enemy makes a person an asset of the enemy, whether he/she intends that or not.

When it comes to officials inside the Trump administration, the problem also becomes more difficult for people to receive because of the fierce loyalty of President Trump’s supporters.

With regards to Mr. Trump’s National Security Advisor Herbert McMaster, UTT does not dispute his war record or his desire to do what he believes is best for his country.  Desire has little to do with this.

One does not have to know or understand he/she is a tool for our enemy.

As UTT documented in last week’s article here and in our recent video here, Mr. McMaster is ignorant of Islamic doctrine (sharia) and does not appear to concur with Richard Higgins’ assessment that a coalition of Marxists and Islamists are working together to overthrow the United States, despite a mountain of evidence to support this reality.

Thus, when Mr. McMaster keeps people inside the White House who he believes have a more “measured” perspective yet are also ignorant of the Islamic threat – many of whom support former President Obama – and he purges the all of the people who do, in fact, understand Islamic doctrine and how the enemy intends to win this war – like Richard Higgins – that is Civilization Jihad by OUR hands, whether Mr. McMaster knows it or not.

Anyone who is unaware that Islamic sharia supports what ISIS and Al Qaeda are doing and that the Muslim Brotherhood’s by-laws and strategic plans call for the overthrow of the U.S. government does not understand this war.  That makes such a person ignorant or complicit.  Either way that person need not work in the national security realm.

Anyone who gives a platform to “moderate muslims” or anyone else who speaks untruthfully about Islam serves the objectives of our enemy and, therefore, stands in the enemy’s camp.