The Chautauqua Institution, a non-profit educational center “originally the Chautauqua Lake Sunday School Assembly, was founded in 1874 as an educational experiment in out-of-school, vacation learning,” according to its website.  Chautauqua supports theatre programs, debates on “The Suffrage,” hosts concerts with acts like Sheryl Crow, and is a significant driver for the Muslim Brotherhood’s jihadi Movement in the United States.

The major overtaking of Chautauqua by jihadis was led by Reverend Joan Brown Campbell, the Director of the Department of Religion at the Chautauqua Institution, and the first female to serve as the General Secretary of the National Council of the Churches of Christ in the USA (NCC) and as Director of the US Office of the World Council of Churches (WCC).

As those who follow UTT know, the National Council of Churches (NCC) in the United States has long defended and advocated for terrorist/jihadi organizations, including many of the Muslim Brotherhood front groups.  The World Council of Churches has publicly called for Israel to release Hamas terrorists.

The Muslim Brotherhood’s stated method to overthrow the United States government and replace it with an Islamic State is “Civilization Jihad by OUR hands.”  They get our leaders in the religious, political, military, law enforcement, media, intelligence, educational, and business communities to do their bidding for them.

And that is just what Reverend Joan Brown Campbell and the leaders of Chautauqua have done since 2002 – right after 9/11.

Reverend Campbell brought Karen Armstrong to Chautauqua Institution, which opened the doors of Chautauqua wide to Saudi Arabia, the Muslim Brotherhood, and jihadis from all over the planet.  Armstrong is a former Catholic nun who defends jihadi martyrdom operations (“suicide bomber), advocates for jihadis, and blames 9/11 on United States and the West in general.  She works closely with numerous MB leaders around the globe. 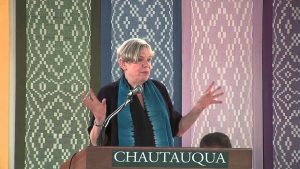 The Family of Abraham/Abrahamic programs, brought to Chautauqua by Armstrong and her jihadi allies, are Muslim Brotherhood operations which perpetuate the lie that Christianity, Judaism, and Islam are three Abrahamic faiths which worship the same God.  They never discuss the doctrinal components of Islam – which are the core of Islam – which call for the killing or subjugation of all non-muslims under sharia, nor do they mention that core Islamic doctrine teaches Jesus will return at the end of days and cast all Christians into hell for not converting to Islam and will slaughter all the Jews for being Jews (Bukhari 2222: Book 34, Hadith 169) 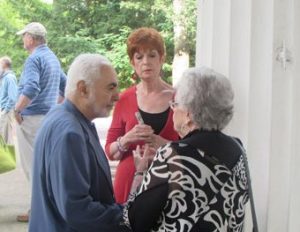 Since 2002, thanks to Karen Armstrong with support from Reverend Campbell, Chautauqua has hosted senior Muslim Brotherhood jurist Imam Feisal Abdul Rauf each summer.  Rauf is the man behind the drive to build a mosque/Islamic Center at the site of the 9/11 attack in New York City through his Park 51 and Cordoba Initiative projects.  He is also a sharia scholar whose book, Islam: A Sacred Law, reads like an ISIS publication, stating the purpose of Islam is to establish an Islamic State under sharia. 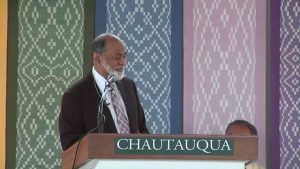 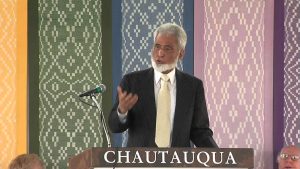 Other suit-wearing jihadis Chautauqua brings in include:  Abdul Malik Mujahid, listed as one of the world’s 500 most influential muslims (2011-2015), is a former President of the Islamic Circle of North America (ICNA) which was identified as a part of the Muslim Brotherhood Movement by the Department of Justice in the largest terrorism financing and Hamas trial ever successfully prosecuted in U.S. history (US v Holy Land Foundation, Dallas, 2008).  He is also the six time Board chair of the Parliament of the World’s Religions and former Chairman of Hamas’ front organization the Council of the Islamic Organizations of Greater Chicago (CIOGC).  Sayyid Syeed, the National Director for Interfaith outreach for the Islamic Society of North America (ISNA).  ISNA was identified by the Department of Justice as a Muslim Brotherhood organization which directly funds the terrorist group Hamas, and whose stated goal is to wage “Civilization Jihad” in the United States to overthrow our government and replace it with an Islamic State; Dalia Mogahed, a leading female in the Muslim Brotherhood’s Islamic Movement who works with several MB/Hamas organizations like the Council on American Islamic Relations (CAIR), the Muslim Public Affairs Council (MPAC), the Islamic Circle of North America (ICNA) and others; Khalid Qazi, the founding Director of the Western New York chapter of the Muslim Brotherhood’s Muslim Public Affairs Council (MPAC); and many others including Sulayman Nyang, Dr. Laila Al-Marayati, and Eboo Patel. 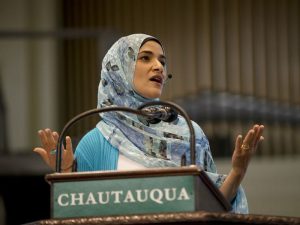 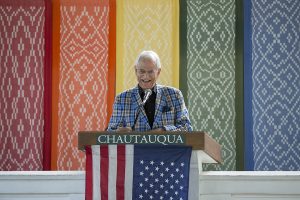 This entire Muslim Brotherhood Chautauqua operation supported by John Esposito, the Director of the Prince Alwaleed bin Talal Center for Muslim and Christian Understanding at the formerly Catholic Georgetown University.  Alwaleed bin Talal is a Saudi prince and one of the richest men in the world, who personally funds terrorists and Muslim Brotherhood operations – but I repeat myself.  John Esposito at Georgetown University is a close colleague of bin Talal, defends jihadis and Islam, and continues to act a an agent of Saudi Arabia, a foreign power. FARA alert. 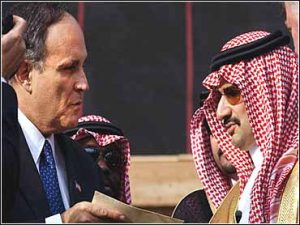 For 15 years, Chautauqua Institution has been the conduit for a successful Muslim Brotherhood Information Operation which has given the tens of thousands of people who attend their 9-week and individual programs a counter-factual understanding of Islam and the intentions of the Muslim Brotherhood.

This is a tremendously successful operation for our enemy.

Remember, this is Information Warfare.  This war is about propaganda and political influence operations. Its more about counterintelligence and espionage than it is about “terrorism.”

Just ask Congress about their IT penetration by muslims.

What can you do besides sit there, read this, and get angry?

Remember, the best-dressed and “nicest” muslim in the room, is the most dangerous.