Is America Still At War With Islam?

From the Halls of Montezuma, To the shores of Tripoli
We fight our country’s battles, In the air, on land, and sea;
First to fight for right and freedom, And to keep our honor clean;
We are proud to claim the title Of United States Marine.

Two Hundred and Eleven years ago on April 27, 1805, the United States Marines defeated the Muslims of the Barbary States (Algiers, Morocco, Tunis, and Tripoli) in Derne, Libya, and for the first time in history the flag of the United States flew over a fortress of the old world.  “From the shores of Tripoli” in the Marines Hymn is a direct reference to this battle.

On 14 May 1801, the Pasha of Tripoli indicated his extreme dissatisfaction with American “tribute” by having the flagstaff cut down in front of the U.S. Consulate. This act led to a declaration of war against Tripoli and the sending of more U.S. war vessels to the Mediterranean. During a storm, the USS Philadelphia, went on the rocks and her crew was captured and imprisoned by the Muslims at Derne.  The bombardment of Tripoli by U.S. vessels and the offer of $100,000 ransom for the crew of the Philadelphia failed to sway the Pasha.

On 29 November 1804, Army Officer William Eaton, First Lieutenant Presley O’Bannon (USMC), Midshipmen George Mann (U.S. Navy) and seven Marines landed at Alexandria, Egypt, from the USS Argus, and proceeded to Cairo.  On 8 March, Eaton and his motley army of about 500 men, 100 camels and a few mules started the long march across the Libyan desert. They arrived at Derne the night of 25 April, and the next day, under a flag of truce, offered terms of amity to the Governor of Derne.  The reply to this offer was “My head or yours.”

On April 27, 1805, the USS Nautilus, USS Argus and USS Hornet commenced their bombardment, and Lieutenant O’Bannon, with his Marines, a few Greeks, and as many of the cannoniers passed through a shower of enemy musketry, took possession of one of the enemy’s batteries, planted the United States flag upon its ramparts and turned the guns upon the enemy. After two hours of hand-to-hand fighting, the stronghold was occupied.

The Tripolitans counterattacked the fortress a number of times, but were repulsed with heavy losses. Finally, on 28 May, Eaton’s forces launched a spirited bayonet charge which drove the enemy from the vicinity of Derne.

Presley O’Bannon was presented with a jeweled sword with a Mameluke hilt by the newly installed pasha.   The Mameluke swords are still carried by Marine Officers today.

In the first battle and victory for the U.S. Marines and the U.S. military on foreign soil, President Thomas Jefferson and America defeated the Muslims of the Barbary States.

Today, the Global Jihad continues and Derne is the headquarters for Ansar al Sharia and the place from which many Muslim martyrs depart for operations in Iraq.

If only America and Marine Corps leadership had the clarity President Jefferson and hero/Marine 1st Lt Presley O’Bannon had in 1805, we might be victorious again. 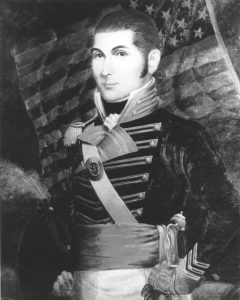